Black has become the default color for HEMA practitioners, sometimes drawing the ire of Olympic fencers who see this color as the exclusivity of their masters and coaches. This debate in itself raises some interesting questions about fencing culture and feelings of ownership and appropriation in martial arts… questions that will not be raised in this article.

Rather, we will look at the history behind the uniform. The origin of the black garbed fencing coach tradition is taken for granted as being quite ancient, but a quick look at some of the historical artwork from previous centuries shows very little instances of fencing masters wearing black. How did white and black become the staple of hierarchy in modern fencing? It appears that the history of fencing garment is not as uniform as one would think (pun intended).

One thing which is quite evident when looking at ancient fencing artwork is that standard uniforms, even for a single group, was far from being the norm. Fencers are pictured wearing all sorts of clothes, from rich and flamboyant garments in fencing treatises to more toned down clothing in drawings of fencing salles.

By the late 17th century, we start to see fencers with coats and vests removed, fencing in their white shirts. Whether this was a new phenomenon, or simply a movement to showcase more realism in fencing scenes is unclear. We can easily imagine that this could have been a practice done in the past in order to stay relatively cooler during active fencing practice, and this is where we can also imagine that white started to become the de facto color. 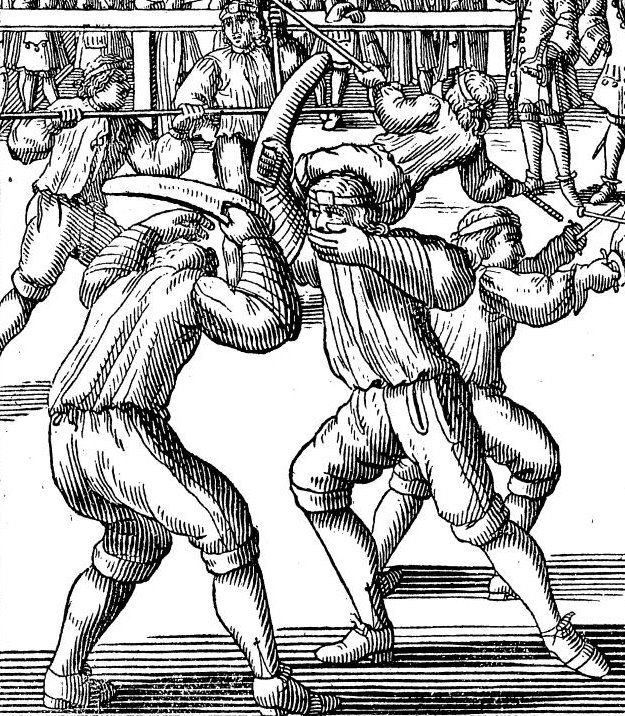 Indeed, before the era of super steadfast chemical dyes, gentle washing soap and high efficiency front load washing machines, clothes meant to be cleaned often- such as shirts, socks and underwear- were most often white. White is a color that is easy to stain, but that will never fade, even after countless aggressive washes, and is then a logical choice for active wear, and so such a color was worn all over the world for this same reason. Wherever you go, it is likely that traditional underwear and shirts will tend to be white, even more so in the case of active wear. For example, although modern Kendokas now wear blue- white being reserved for women and highly ranked masters- it appears that, when examining artwork and photographs, white was once the go to color for a good majority of them, as it still is for most other Japanese martial arts. The reason behind this change, which seems to have happened somewhere in the 1920s, would deserve an article on its own.

Kendo,just as European fencing, seems to have favored white keiko gi as far as the 1920-30s. This practice seems to have been common to most other styles of bujutsu which, contrary to kendo, kept this practice alive.

Black was a difficult color to make. Soot could be used to color the fabric, but would easily wash away. Iron oxyde had to be used to make it color fast, but just as today black was the hardest color to keep. With washing and exposure to sunlight it would in time turn to gray or revert to one of the underlying dyes such as brown or purple. It was then not quite a sensible choice for someone wishing to exert himself physically.

By the turn of the 19th century, we see some distinctive fencing apparel being illustrated. White shirts with side buttons paired with white knickers and socks. White becomes the go to color of almost every sport, from cricket to tennis. Standard uniforms start to become the norm in many areas of society, including sports. Again this probably has an explanation in the durability of white garments: sport clothes were bound to take sweat, mud or even blood, and so you needed something that could be cleaned often.

Cleaning before the 20th century used to be a fairly rough affair. Clothes would be cleaned at fairly long intervals as this was a time consuming task. You would need to go to a water source, rinse the clothes and wash them in lye, or lye soap if you were wealthy enough to afford it. Lye is of course extremely caustic, and would do short work of delicate natural dyes. The clothes would be beaten on rocks or with paddles as to force the cleaning agents through the fabric, the invention of the washing board, laundry soap and starch in the 19th century made the whole process easier both on the washer and the clothes, but still relatively rough compared to modern technologies. These innovations made washing so much quicker that you could now contemplate having a “laundry day” once a week, only expediting the demise of your favorite black shirt. Then your clothes would be put in the sun to dry, again helping to fade whatever pigments were in your garments.[1] 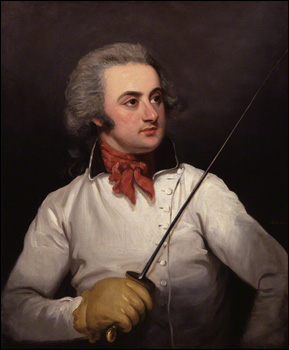 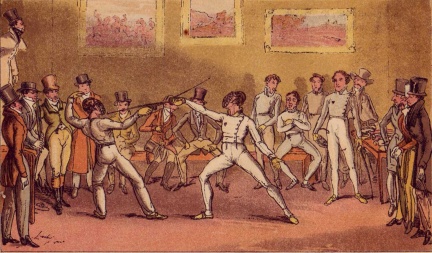 So what is the deal with black then? One article from La Vie Parisienne in 1868 might hold the answer. According to the paper, a fencer nicknamed le tireur noir, or “the Black Fencer”, participated in fencing tournaments dressed in black velvet. This angered many fencing masters who were, according to the article, extremely proud of the whiteness of their uniforms. Some even refused to fight him unless he changed for a more conventional uniform.[2] The Black Fencer was most probably Louis Mérignac, a legendary fencer of the time which was also known as le tireur noir. His use of a complete black uniform convinced many other influential fencers to don the black as well.[3] Tavernier did make the observation when describing Mérignac’s fashion choice that it might also have been a tactical one, as it is apparently easier to thrust at a white uniform than a black one which fools the perception of depth. [4]

Mérignac was probably able to introduce a black uniform because of an advance in dying. In 1863, Aniline Black was the first synthetic black dye to be developed, which was far more colorfast than previous natural dyes.[5] Subsequent innovations would make the production much more simple, and spark a great demand for black garments which until then had been mostly sported by the wealthy who could afford to renew their wardrobes often. This is fine for outer garments which didn’t need regular washing, not so much for sporting clothes regularly drenched in sweat. 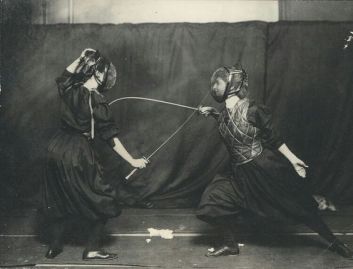 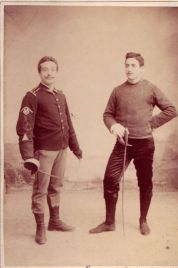 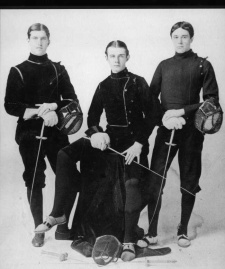 By the late 19th century, black was also used in fencing competitions to mark a valid strike as chalk was put on the blades.[6] At this time, many different solutions were tried to make hits more visible in the increasingly competitive world of fencing tournaments, chalk was then only tried for a relatively short period. This practice had a distant ancestor in the Franco-Belgian rules of longsword tournaments during the early 17th century.[7]

At the moment, it isn’t quite clear when the Fédération Internationale d’Escrime decided to rule on the color of fencing uniforms, but when we look at those worn in the Olympic Games starting in 1894 black uniforms were rapidly falling out of fashion in favor of all whites. By 1912, just a year before the creation of the FIE, black had totally disappeared even from socks.

Although one exception remained: women’s fencing. It seems that until the 1940s you could see women wearing black skirts at Olympic tournaments, and until the 1950s they remained in many fencing salles. Again, the reason behind this is not quite clear, and does not seem to have been reflected in other sports like tennis.

How did black become associated with masters? It is possible that as the color faded out of fashion and tournaments, that only old fencing instructors no longer participating in competitions still wore their trusty black uniforms, becoming unintentionally the color associated with masters and coaches. Many fencing federations have removed color requirements from their rules, but black is still taboo for non instructors and especially in competitions, while white is still the dominant choice. The myth that white is a traditional choice spanning centuries can be compared to a similar idea; that wedding dresses were always white, with associated values and a symbol of purity, while in fact white dresses were never popular until the 1840s and in most cases well into the 1900s.

The adoption of black by the HEMA community comes from many factors: early availability of padded fencing coach equipment, a desire to be different from the Olympic fencing crowd, and perhaps a touch of counter-culture aesthetics in the early community. Whatever the reason, it seems like black is now seen in many people’s eye as a defining characteristic of the “HEMA look” and compared with its historical counterpart this dye is here to stay. 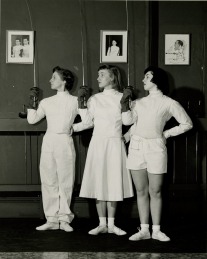 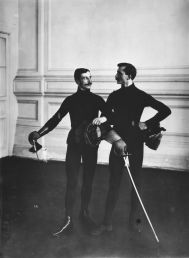 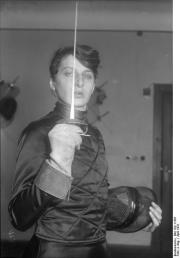 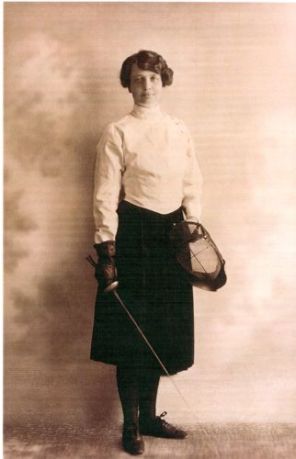 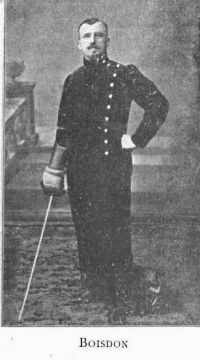 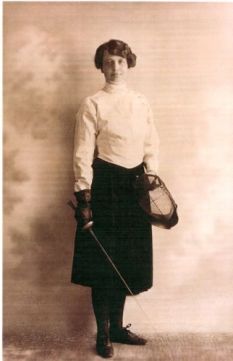